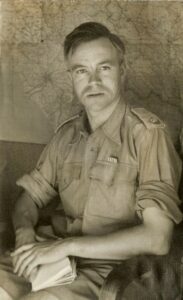 From the summer of 1943 to the end of 1945 a special Anglo-American military unit operated in Italy with the aim of protecting and salvaging Italian cultural heritage threatened by the war. The “Monuments, Fine Arts and Archives Sub-Commission” (MFAA), which included prominent Anglo-American museum directors, art historians, archaeologists and scholars wearing the military uniforms of their countries, was established not only to record the damage, loss, or survival of historic monuments and collections but also to create a photographic record of its activities in the field.

A large set of photographs, as well as reports, documentation and publications produced by the MFAA, was deposited in the Archive of the BSR thanks to the dual role played by John Bryan Ward-Perkins as both BSR Director (1945-1974) and as first an officer, and subsequently (July 1945) director of the MFAA in Italy. Ward-Perkins brought this material with him to the BSR when he moved thereafter the war. These records, therefore, represent an outstanding source of evidence and experience  to inform and develop best practice for protection of contemporary cultural heritage in conflict.

Ward-Perkins was serving in the Royal Artillery in North Africa in 1943, under the command of the famous British archaeologist Mortimer Wheeler, his pre-war mentor. With Wheeler, he undertook some of the earliest systematic British efforts to protect cultural heritage in the war, especially at the great Roman sites of Leptis Magna and Sabratha in Libya that had just come under British military occupation. In late 1943 he became a formal member of the MFAA in Italy, where he served until the end of the war when he was appointed director of the BSR. Allied military authorities and official publishers also produced a range of printed booklets to support the cultural heritage protection efforts of the MFAA and military government officers, copies of which are preserved in the BSR archive. They include condensed versions of regional lists of cultural sites for use in the field, US Army civil affairs handbooks on cultural sites in Italy, and two volumes of Works of Art in Italy: Losses and Survival in the War, published immediately after the war to record war damage. The BSR also has copies of the detailed typescript region-by-region final reports of the MFAA, written in 1945-46.

These present the failures as well as the successes of the organisation, and provide a wealth of valuable lessons relating to the protection of heritage in wartime, many of which are equally applicable today. These materials, along with the BSR’s archival photographs, have provided evidence for recent research into the MFAA and the value of its experiences to modern cultural property protection. These include: