At the time of its maximum expansion, the city of Sabratha boasted at least six public bath houses. In  one of these, located near the famous Theatre and hence called the Theatre Baths, the floor of the frigidarium was embellished - in the course of an early III century renovation - with two mosaic panels decorating the access to the cold pools.

Though simple in their composition, the mosaics serve well as a summary (and perhaps also as a a reminder!) of the activities one was supposed to perform during the visit to the baths. The mosaics depict a pair of sandals, the oil flasks containing the perfumed essences with which bodies were abundantly rubbed after bathing and the strigils used to remove the oil in excess. To make the message even more clear, images are accompanied by the acclamations of greeting Bene laba "Wash well!" and Salvom lavisse "It is well to have washed". 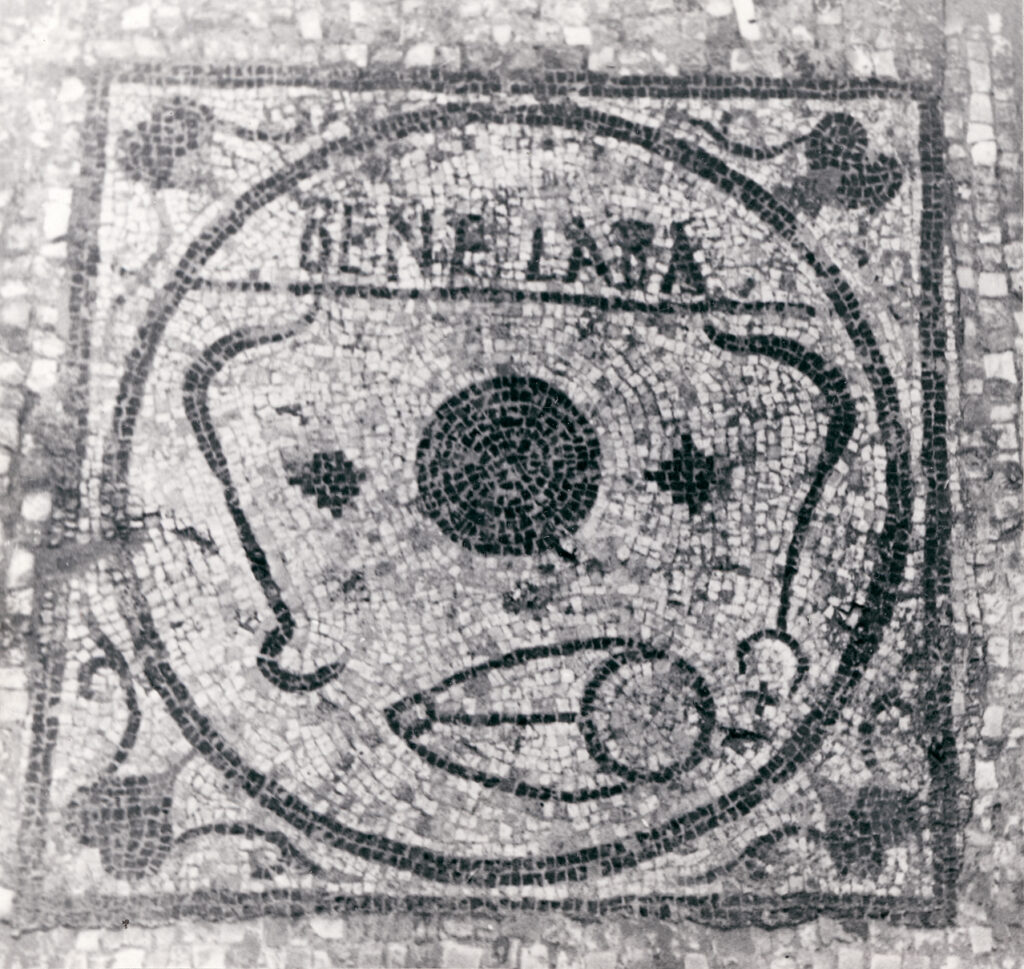 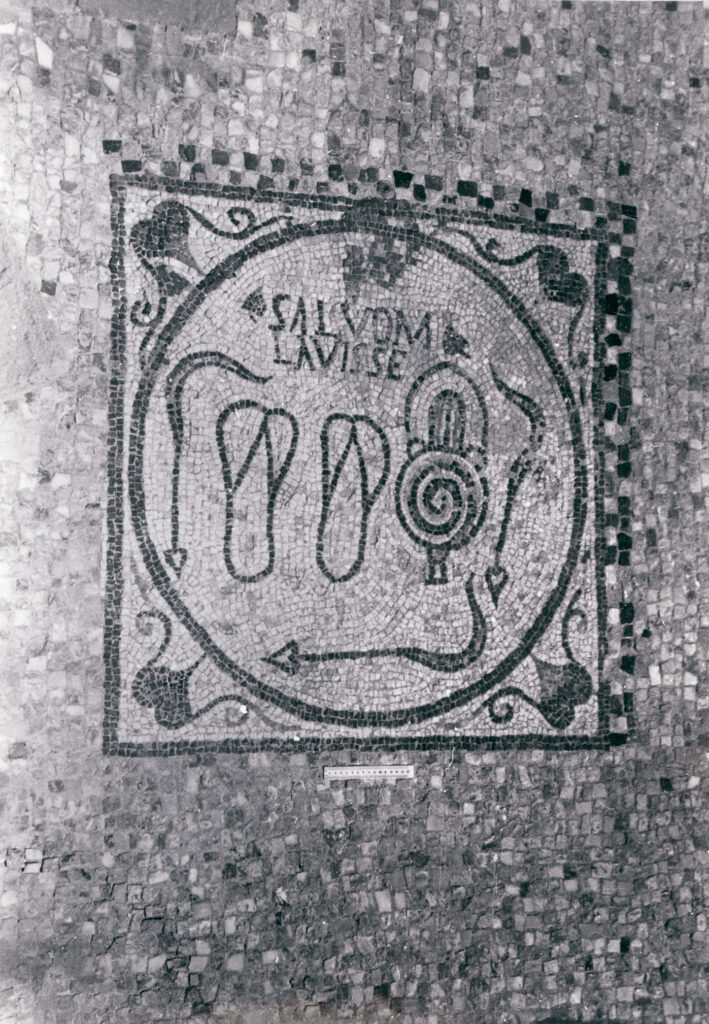 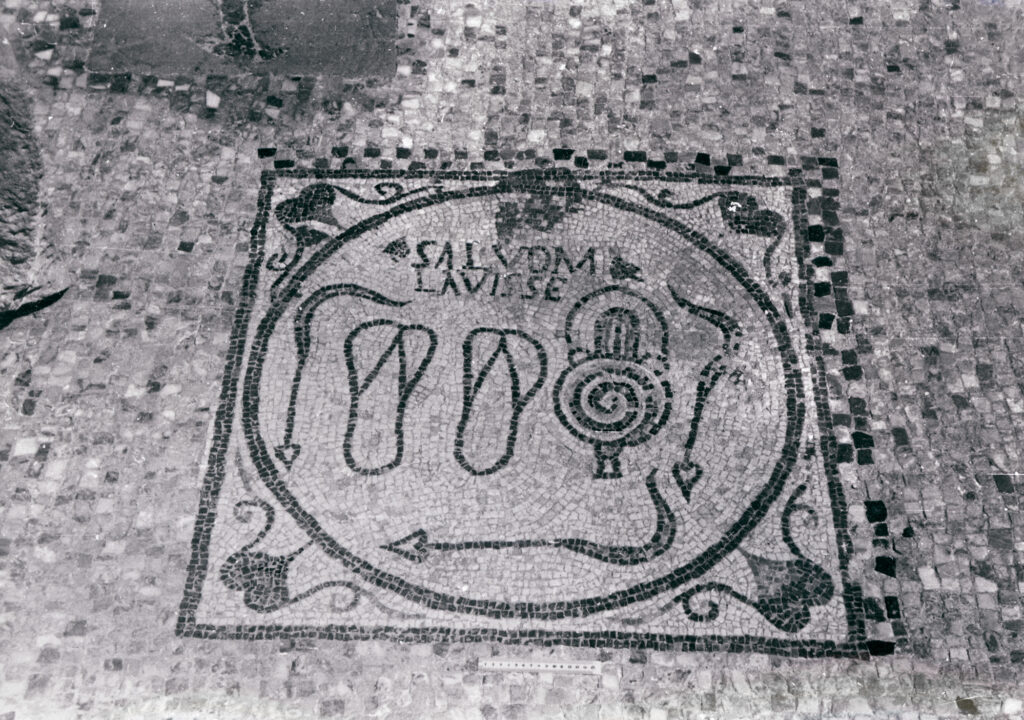 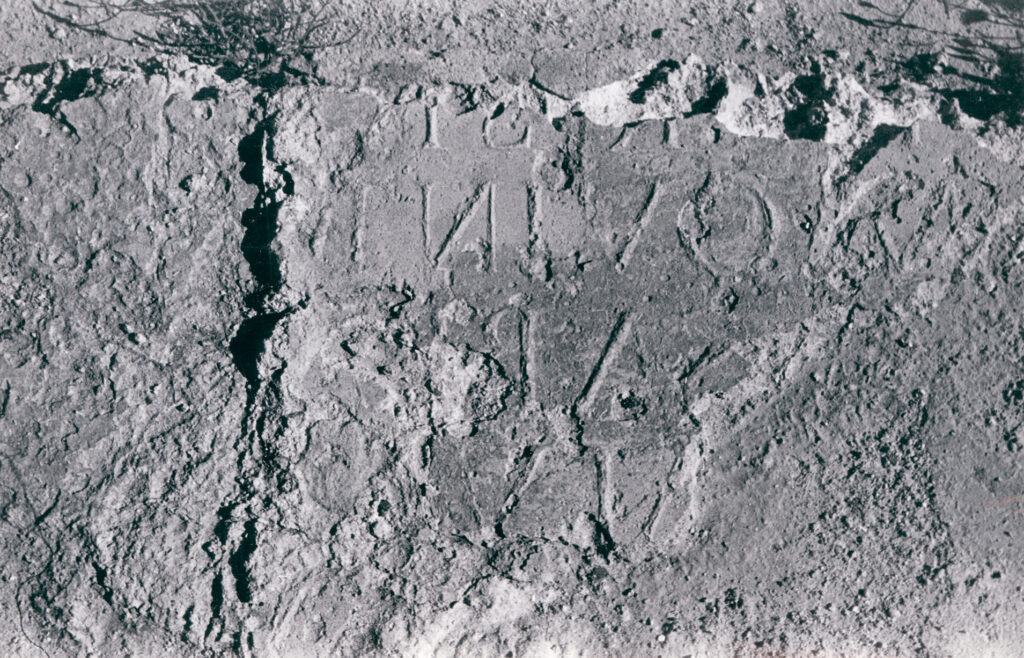 Unlike Lepcis Magna, Sabratha lacked good quality limestone quarries and marble was not so lavishly employed, therefore many of the city's buildings and decorations were made of local sandstone blocks covered with painted plaster. These are by nature rather perishable materials which under the joint erosive effect of sand and wind tend to decay quickly. Hence, photographs taken at the time of the discovery become essential and extremely valuable as, sometimes, they can be the only thing we are left with.

Sabratha, series of inscriptions on perishable materials (IRT 161 and 205)

When photographed, a stuccoed sandstone entablature block still carried traces of color in the letters and in the decorated band above, and so did a Christian tomb cover simply made of two sandstone blocks plastered and decorated with a painted inscription and painted images depicting vine leaves, sprays of grapes and crosses flanked by pairs of doves and peacocks.
Equally perishable are the many impressions left in the wet mortar by inscribed marble panels which were reversed and reused, in late repairs, as floor revetment. 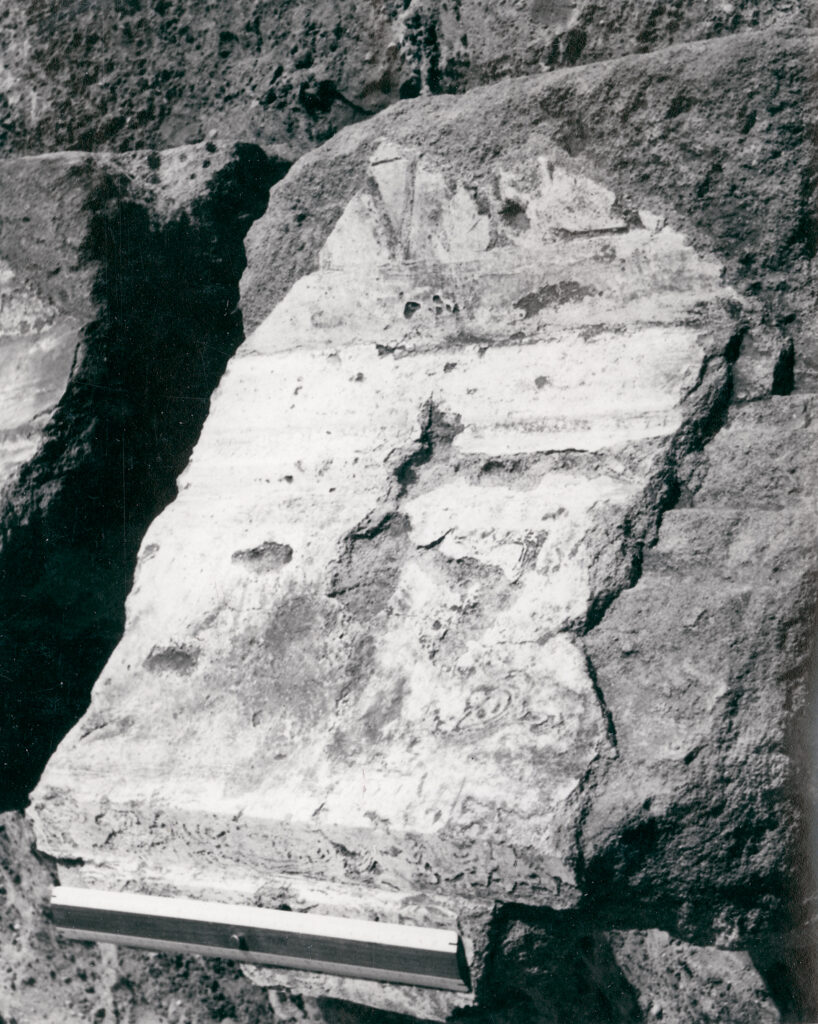 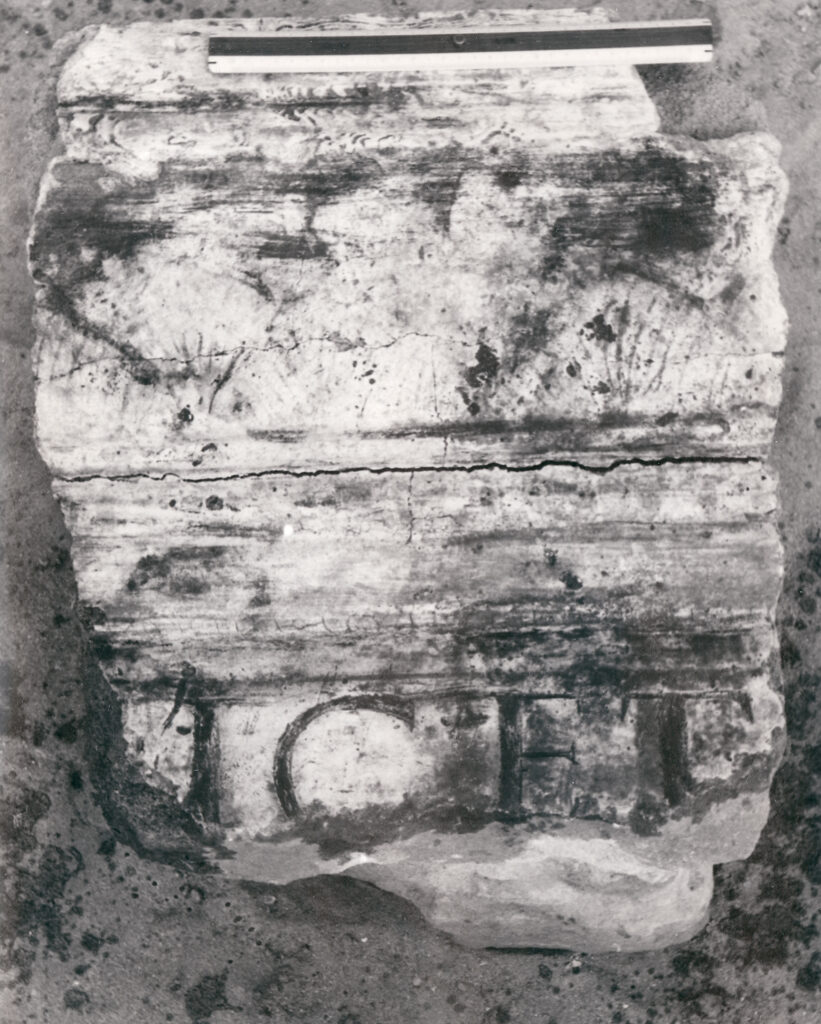 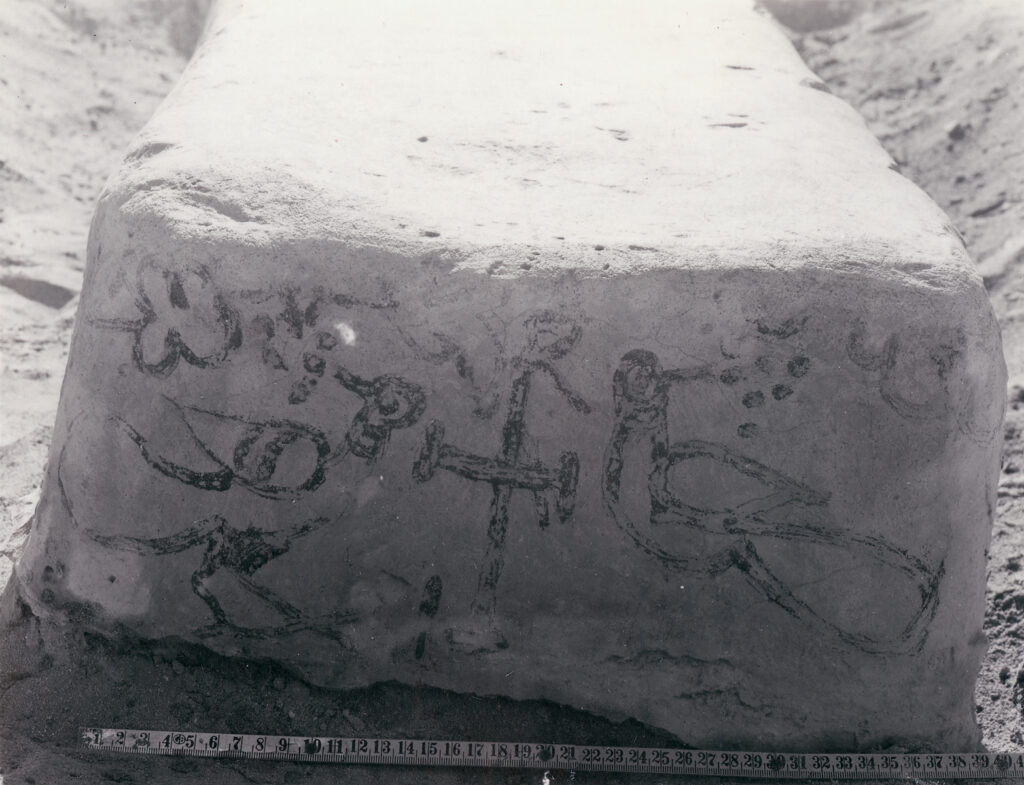 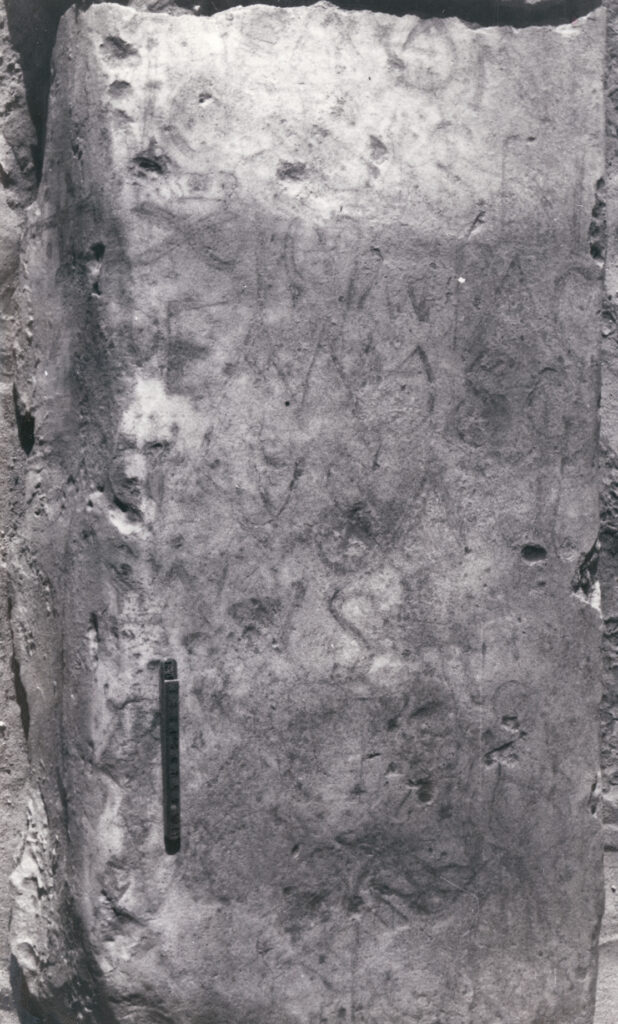 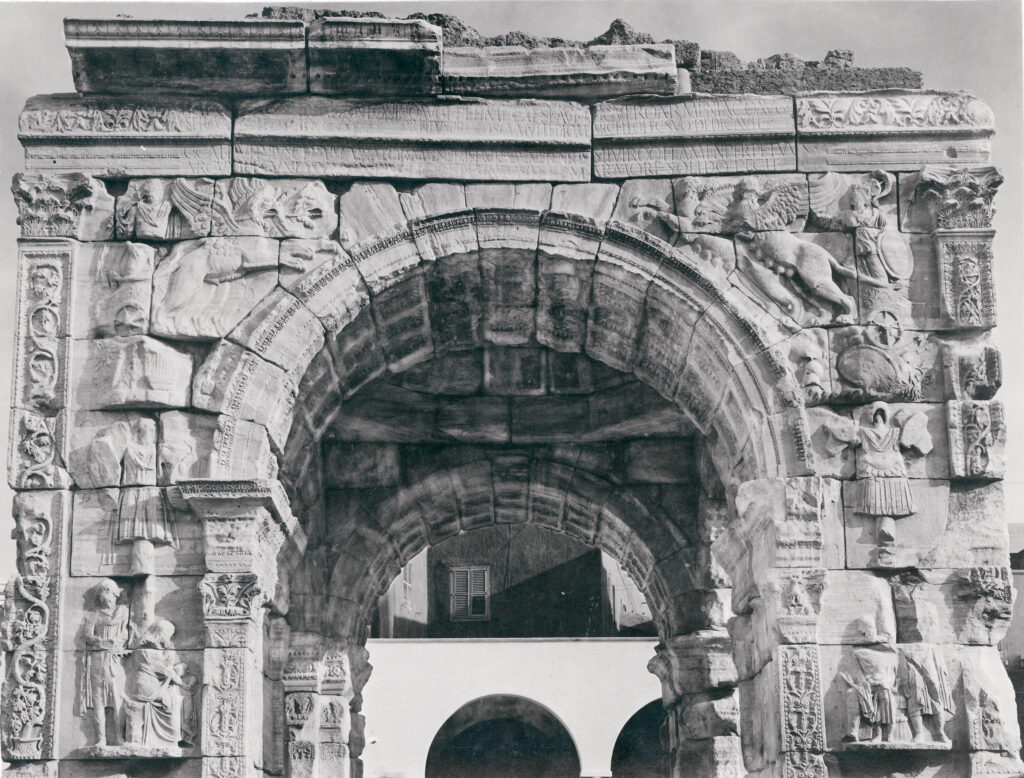 It is not by chance that the toponym Tripolitana regio, which from the III century AD indicated the territory of the three most important cities of the coast between the two Sirtes, Sabratha, Lepcis Magna and Oea, was inherited by the latter, the only city to survive Arab invasion and today capital of Libya.
Whilst in Lepcis and Sabratha early abandonment and sands allowed the magnificent Roman and Byzantine ruins to be preserved, in Oea on the contrary continuity of civic life and historical vicissitudes erased nearly all traces of the ancient urban fabric. The imposing four-way arch, erected in 163 AD in honour of the emperors M. Aurelius and L. Verus, stands today as the only monumental testimony of the ancient city.

With its square plan, it marked the crossing of the two major thoroughfares, one of which led to the port. It was the earliest arch in Africa to boast on its Greek marble surfaces a rich figurative programme meant to exalt the political and military power of Rome as an expression of divine will: on the North and South sides facing the cardo, above trophies and prisoners, Apollo and Minerva lead chariots drawn by winged animals, griffins and sphinxes. In chiastic juxtaposition, on the East and west elevations over the decumanus, winged victories are set above imagines clipeatae and niches originally holding honorific statues.

But until the 1916-1918 Italian restauration works all the decorative apparatus, the dedicatory inscription repeated on all four sides and the octagon-shaped dome roofing the arch were known only from ancient prints and travellers' accounts: the building was for the most part underground, buried within the intricate Medina quarters and suffocated by groceries shops nested in the niches and by a coal cellar. In 1912 it had also been transformed into a picture house, with the fornixes walled and the decorations hidden under thick layers of mortar and paint.